WHAT is the Presanctified Liturgy? The Presanctified Liturgy, one of the four Divine Liturgies of the Orthodox Church, plays a very significant role in Great Lent. It is an exceptionally beautiful Divine Service that combines elements of Vespers with some elements of the regular Divine Liturgy, (but without any of the Anaphora/Consecration), and concludes with the reception of Holy Communion. The “Liturgy of the Presanctified Gifts” bears this name because the Lamb, (which is the square piece of Holy Bread that becomes the Body of Christ, and is consumed in Holy Communion), is consecrated or sanctified during the Liturgy on the previous Sunday. The Service also bears the name of St. Gregory the Great (540-604), Pope Gregory I of Rome (590-604). It is generally believed that he compiled and wrote down the text of what he observed in practice in Constantinople in the late sixth century, while he was the papal ambassador for 6 years to the Eastern Roman (Byzantine) Empire, whose capital was in Constantinople.

WHEN is the Presanctified Liturgy Served? In parish use today, the Presanctified Liturgy is appointed to be served only during Great Lent on Wednesday and/or Friday, designed to be served in the evenings, or, when necessary, on any weekday when a Liturgy is served. The Liturgies of St. John Chrysostom and St. Basil are permitted only on Saturday and Sunday, respectively, and have been forbidden on weekdays since at least 692, except for the Feast of the Annunciation (March 25/April 7), when the St. John Chrysostom Liturgy is served.

WHY is there the Presanctified Liturgy? The regular St. John Chrysostom Liturgy is seen as a festive resurrectional celebration, which is out of step with the intense penitential nature of the Great Fast. Yet it is desirable and helpful to be aided in one’s Great-Lenten spiritual struggles by receiving Holy Communion during the week. This is the reason why the Presanctified Liturgy exists — so that people can be strengthened by receiving Holy Communion at the end of a day of prayer and fasting, while still observing the Great Lenten Fast’s penitential nature and efforts. 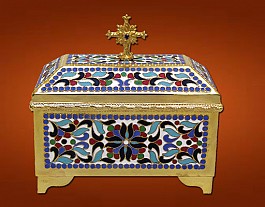 HOW is the Presanctified Liturgy Prepared? Beginning on Cheesefare Sunday, and at the five Sundays of Great Lent (and possibly Palm Sunday), extra Lambs are prepared and consecrated during the Divine Liturgy for use at however many Presanctified Liturgies will be served in the coming week. Just prior to the Priest’s Communion, the consecrated Lamb — the Body of Christ — is either dipped into the Blood of Christ, or, using the liturgical spoon, some of the consecrated Blood of Christ is applied to the consecrated Lamb; the process is called intincture. Then the intinctured consecrated Lamb is placed in a special small tabernacle, similar to the one in this picture, (or sometimes on a diskos) which remains on the altar with a candle, usually in front of the large Tabernacle. The extra time that this preparation takes is the reason why there is a longer wait until the people’s Communion after the “One is Holy,” while the choir usually sings additional hymns.

THE ORDER OF THE PRESANCTIFIED LITURGY
(1) Beginning and Three Antiphons: The Liturgy of the Presanctified Gifts starts like Daily Vespers, with a Reader’s opening and chanting of the Creation Psalm 103/104 and the Great Litany. Then, serving in place of the ususal three Antiphons of Divine Liturgy, the 18th Kathisma of the Psalter, comprised of Psalms 120 to 134, is either sung or chanted, divided into its three stases. [Note: The Psalter is the name for the Old Testament’s 150 Psalms of David. They are divided into 20 groups, called Kathisma(s); each Kathisma is in turn divided into three sections called a stasis (stases). The 18th Kathisma comprises the Psalms of Ascent, anciently sung as Jewish pilgrims journeyed to Jerusalem for major feasts, seen as a prototype of our pilgrimage journey to Pascha.] During the 3 Antiphons, interspersed with Little Litanies, the Presanctified Gifts are placed onto a diskos (1st photo above), covered with the star and a small veil, and then reverently transferred from the altar to the Table of Preparation/Oblation.

(3) O Gladsome Light: The joyful singing of the extremely ancient evening hymn, O Gladsome Light (one of the oldest Christian hymns) always immediately follows the Little Entrance, as the clergy return to the Sanctuary.

(4) Two Old Testament Readings and Prokeimena: In the same place as the usual single Vespers daily Prokeimenon and the three Old Testament prophesy readings chanted for feast day Vespers, now two Prokeimena and two readings follow. The first prophesy is from Genesis or Exodus; the second from Proverbs or Job.

(5) The Light of Christ Illumines All: Immediately after the 2nd Prokeimenon, the priest takes a candle and censer, turns to the people and proclaims loudly: “The Light of Christ illumines all,” while the people do a prostration. This beautiful and meaningful affirmation is found only in the Presanctified Liturgy.

(6) Let My Prayer Arise: One of the two most distinctive hymns found only in the Presanctified (the other being “Now the Powers”), this much beloved hymn, in its customary trio melody, is one of the most beautiful hymns of the whole year. It is a special musical rendering of selected moving, penitential verses, again from Psalm 141.

(7) Prayer of St. Ephraim: One of the most powerful, beautiful and beloved prayers of Great Lent, frequently said daily by the faithful, liturgically, this is said only at daily Lenten Services, never on Saturday or Sunday. The three penitential petitions are accompanied by a prostration (kneeling and touching one’s forehead to the floor).

“O Lord and Master of my life! Take from me the spirit of sloth, despair, lust of power and idle talk. But grant rather the spirit of chastity, humility, patience and love to Thy servant. Yea, O Lord and King, grant me to see my own transgressions/sins and not to judge my brother, for blessed are Thou unto ages of ages. Amen.”

(8) Litanies: Several Litanies and beautiful special priest’s prayers follow, similar to those that follow the Gospel in the regular Liturgy, with an emphasis on praying for catechumens, who traditionally were being instructed during Great Lent, and were baptized at the end of the Great Fast, on Great and Holy Saturday. (9) Great Entrance: One of the most significant differences between the Presanctified and the usual Liturgy is the Great Entrance. Usually, the Holy Gifts have not been consecrated, and the customary Cherubic Hymn is sung. Here, it is replaced with “Now the Powers of Heaven do serve invisibly with us. Lo, the King of Glory enters. Lo, the Mystical Sacrifice is upborne, fulfilled!” The people make a prostration while the clergy make the Great Entrance in complete silence. The priest carries the already consecrated Body of Christ — “the Mystical Sacrifice is upborne” — with the aer/veil over his head (as seen in the photo here), because we veil our heads in the Presence of the Lord. Then we stand and sing, “Let us draw near in faith and love, and become communicants of life eternal. Alleluia.”

(10) Prayer of St. Ephraim: Emphasizing again the penitential nature of the Presanctified, this beautiful prayer is repeated, with its accompanying prostrations.

(12) One is Holy: As usual, there is the proclamation that the Holy Gifts are for the holy, with its choral response, and then the distinctive Communion Hymn: “O taste and see that the Lord is good. Alleluia.” (Psalm 34:8) With the curtain closed, the clergy’s Communion follows and the Body of Christ is cut up and prepared for the Communion of the people, while the choir sings appropriate hymns.

(13) Communion of the People: The whole purpose of the Liturgy is now completed as the people receive Holy Communion and are united with Christ and become His temples. “O taste and see...” is repeatedly sung here, instead of "Receive the Body of Christ."

(14) Post-Communion: Instead of the jubilant Pentecost hymn, “We have seen the true Light,” we sing instead “Taste the heavenly Bread and the Cup of Life, and see how good the Lord is. Alleluia,” followed by the usual post-Communion hymn, “Let our mouths be filled,” and the Litany of Thanksgiving and special priest’s prayer.